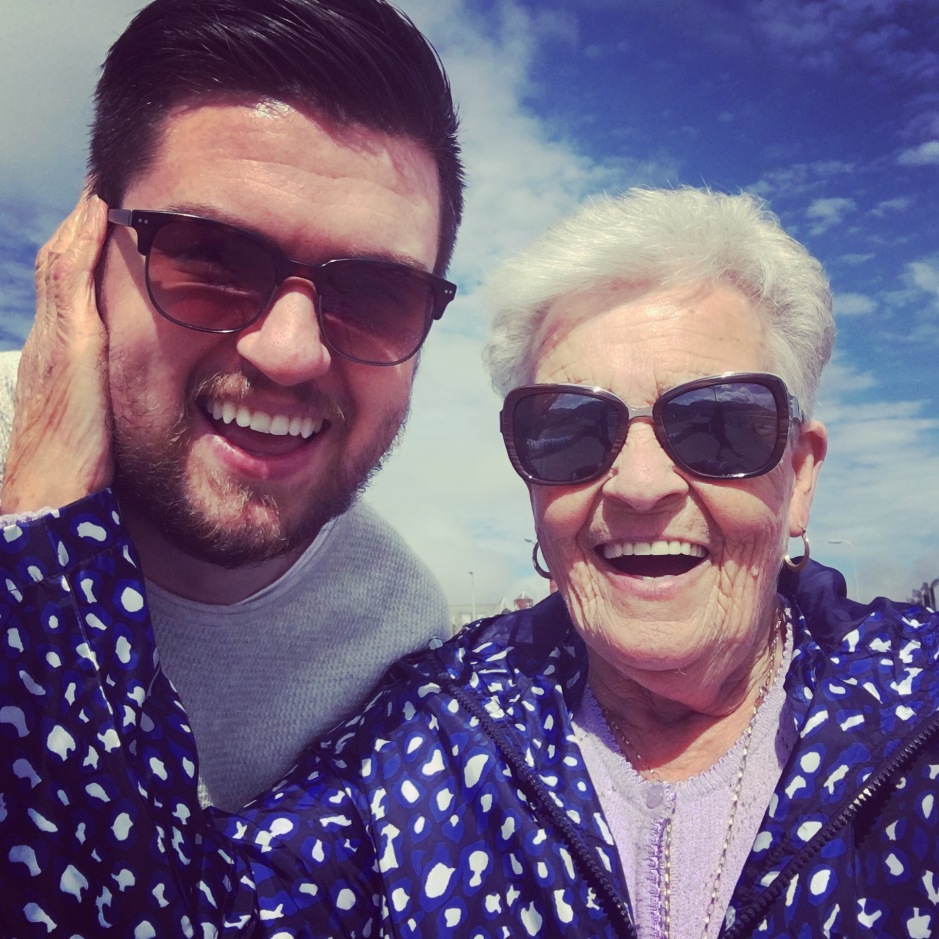 It’s almost been a year since I last posted on the blog, and what a year it has been. It was the year of relationships!

I did manage to complete my HND in Computers and Systems Development (Distinction – thank you very much) I haven’t even applied for a tech job, I’m not sure if it’s even for me, maybe the Web Design side but I will definitely not be developing programs anytime soon!

It might sound crazy but one of the most important relationships in my life is the one with my Nan, this lady is just amazing she is the kindest most heartfelt person you will ever meet! Now don’t get me wrong she’s strict and you don’t want to push her buttons but the love she has for her family is unconditional and anyone that gets to experience it, in my books is a lucky person indeed.

Nan has spent a lot of time in hospital over the last few years, and I try to get there as much as possible work schedules permitting. She’s had ups and down and visit after visit but she’s in high spirits although she’s in hospital at the moment and really doesnt’t want to be there but every time I visit her she has a smile on her face, fed up or not and she’s always really happy to see you! Here’s to many more trips together!

In August last year my world fell apart, Ian and I had been together for over 5 years, we own a house together have two dogs, a cat and for the most part had a perfect relationship, we never fought, we had fun and we complemented each other’s moods. Well I was moody he wasn’t!We did have challenges like any other couple and there were several times the relationship was strained, but August was when it all came crashing down. I didn’t know what to do it was the start of a weeks holiday and all the plans we had together just went out the window.

I know you’re all wanting to know exactly what went on (Right?) but if you’ve read his Blog post you’ll get the jist. The week was unbearable we shouted we cried, we talked (something that we never really spent time doing, not really talking) but ultimately I decided to end it! Five years just gone!

I started back to work and I just couldn’t cope, my nan was still in hospital, my dad and I had stopped speaking (will get to that in a minute) and then my person was no longer there. Work was amazing so supportive not like anything I had expected, I broke down one morning and my boss told me it was time, to take some time.
I was off for a month and I had never felt more guilty, this is not something I have ever done, 7 years in my previous job and I had 1 day off after a car accident, but it was much needed. Ian and I met we talked and talked, fought and then talked. I spent a lot of money, and a lot of time with my Mum, not talking just being there.
​

It was though I was surrounded by my friends, cousins and aunts but still somehow felt alone! By the end of the month we were still broken up but Ian was living at home, it was confusing and hard for both of us, by the end of the next month he had sought help and things were looking better, eventually after two months of being apart I thought we could give it another go, it’s been hard, there are still challenges but everyday gets easier and better and although I never want to go through it again I’m so happy I still have my best friend in my life. 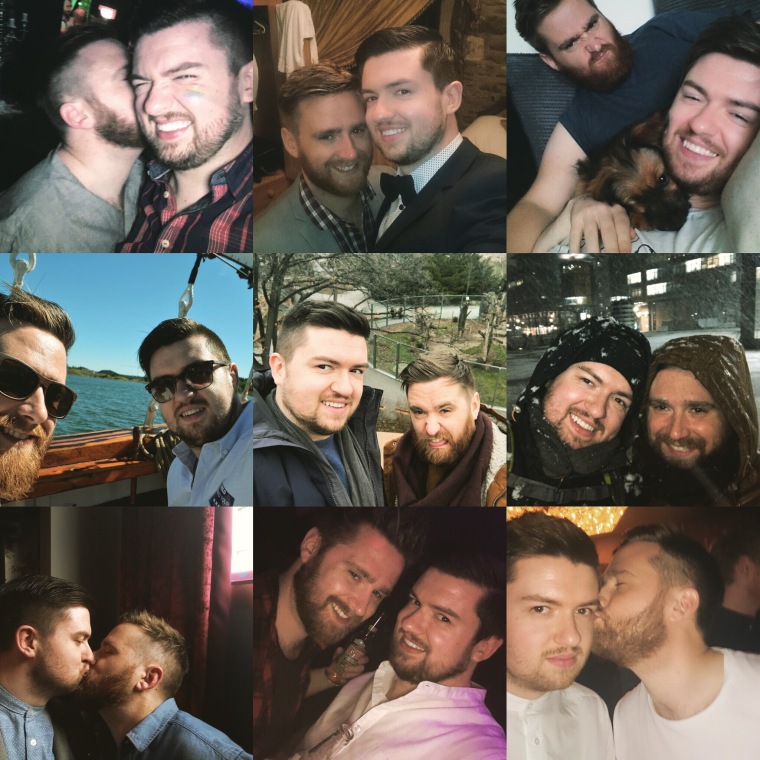 Whilst everything else was going on my dad had been diagnosed with cancer, this was in September 2015 just before his 50th Birthday which I got to celebrate with him (it was a surprise visit with my three aunts, I’ll never forget the expression on his face when he opened the door). Dad left Belfast when I was 2 years old so he was always away, I can’t remember how often he visited buy I always remember how excited I was to see him. I absolutely adored the man when I was younger as most kids do, we talked on the phone every weekend for hours and although he was in Guernsey he always made sure to call. When I was about 8 he moved to Birmingham fell in love, got married and started a new family. During my younger teens I visited over the summer holidays but as I got older not so much.

Throughout his cancer treatment I didn’t really visit, with him living there and me living, working and studying here it wasn’t like I could just jump on a plane after work. This put a lot of strain on the relationship and seeing as most of my spare time was spent visiting my nan (his mum) in hospital it didn’t really leave much time for anything else. I went with Ian for a few days in November/ December that year and then I had the rare opportunity of spending my 28th Birthday with him (my actual Birthday not something we had done since my 18th and I can’t remember any other birthdays together).

Our relationship was always troubled it was by no means a perfect father son relationship but then again who’s is? We both had our issues and ultimately we were so matched in stubborness that we stopped speaking to each other. Time went on and I tried to pretend that it didn’t affect me and still to this day I pretend to myself. It wasn’t the first time we had stopped speaking to eachother we actually didn’t speak from I was 19 until 22 (when my grandfather passed away) we talked a bit in between but again it wasn’t much of a relationship, except our stubbornness we didn’t have much in common. We had the occasional phone call which always ended up the same way (talking about everyone else – not being childish but 20 years of the other family is hard) one thing he always said was that it was my responsibility to look after his wife and my brother and sister, which annoyed me because surely that should have been his. He always forced the relationship and you’d could tell it was forced.

Father’s Day 2016 was when it all went to pieces, there had been an argument between my sister and I, which we had sort of ironed out but a break down in communication, ultimately laid to no communication (funny that). I am the type of person that gets really upset about hurting people and would never intentionally do it, but due to all the crap over the years, I decided enough was enough I was going to move on. There wasn’t a day went by where I didn’t think of him, there were numerous occasions where I would just break down but my stubbornness wouldn’t allow me to give in.

Months later there was an olive branch, he called I answered, I was busy. I called back the next day left a voicemail but he never replied. I know I should have done more to reach out (his brain tumour made him forgetful) he was convinced I hadn’t called but I had and again we didn’t talk. That phone call, the one I was too busy to take was the last time I ever spoke to my dad, it was the last time I ever heard his voice. (Something I will have to live with for the rest of my life).

In December that year at the age of 51 my Dad lost his battle with Cancer, this was a difficult time much more so than I had anticipated. My family got a phone call on the 23rd December to say that he was home from the hospital and that there wasn’t much they could do. We booked flights on Christmas Day, flew over on Boxing Day to return on the 27th (Ian’s Birthday and now my dads anniversary). When we arrived he was sleeping and he never woke up. He passed surrounded by family and I got to be with him one last time, no fighting no arguing, I just sat and held his hand. The only regret I have is not staying right through, we left at 11pm and he took his final breath after 3am.

It was almost a month before he was laid to rest, a mixture of the Christmas holidays and the strange length of time for burial in England meant I had been back to work for 3 weeks before I took time of to go to the funeral. This was a hard month for everyone here and can only imagine what it was like everyone over there. It was a lovely ceremony, not what we are used to being from a catholic family but was well put together and just what he wanted. It was only then that we could start the grieving process and still to this day we are still grieving.

Just when we thought things would get back to some form of normality Ian’s dad was diagnosed with cancer, but we’re determined not to let this break us, we’re determined to be there for each other and push ourselves forward!

I told you it was the year of relationships, but if anything the year has taught me it’s that life is too short! Get out there and do something with it! See the world, learn a language, do something you always wanted to do but were too afraid to! Spend time with friends and family and don’t let your fears or your stubbornness keep you back!

Like any story there’s more than one side, this is my side and I hope I don’t upset or annoy anyone. This was cathartic to write and I thought worthwhile sharing to help others going through similar situations.

There was an error retrieving images from Instagram. An attempt will be remade in a few minutes.